I wish everyone a good start of the NEW YEAR 2023!! And I really want to encourage you to use this time to set new positive intentions to bring more balance into your life, to get less carried away by your daily tasks and endless things to do. But to find more time to connect with your body and and recharge, restore, recover body and mind on a regular basis. The practice of yoga really helps, although there are many ways more ways, like going for walks, meditating, running, swimming, roller blading, dancing, or simply sleeping more… etc etc…

But really remember, find more moments of rebalancing your life so you feel more centred, content, peaceful and less stressed out and agitated and depressed. You need it, the world needs it!

There are two life evening yoga classes at my home studio ‘Body of Light’. Please contact me if you want to join. (£14)

Please scroll all the way down and drop me a note if you want to receive an email with more info or my zoom links and bank details. For the zoom yoga class you can transfer a fee you can afford.

I am planning another Weekend Retreat in Norfolk in Spring or Summer. More info with dates soon!

The way I teach is all-inclusive, not just for people who are fit, flexible and quite strong already. I want to offer an environment which is non-competitive, easygoing, spacious, meditative and accessible for everyone. I’ve been practising and teaching yoga for more than 35 years and I am familiar with many styles and aspects of yoga. I hold an Iyengar Yoga Teacher certificate and a Senior teacher certificate with Dona Holleman who was a close student of BKS Iyengar.

More about Yoga Body of Light

‘Yoga  Body of Light’ has it’s foundation in the precision and vigour of Iyengar Yoga but emphasises more on breathing and the body’s natural flow of movement. Learning the body’s anatomy and how to move from within, the body is seen as an energy field interacting with nature. Remembering the pure joy of body movement we come back in touch with our true inner potential and happiness. How far we take this inner journey to freedom, is unique to each individual.

My interest in yoga started in the 70’s when I was involved in a project with Autistic children in Berlin. The children became my teachers. We gradually bonded through bodywork, music and love. Reading my first book on meditation ‘Hara’ by the philosopher and psychotherapist Graf von Dürkheim when I was 29 I decided to go on a journey, which became my life’s journey. I had my first meditation and yoga experience in a mud hut in South India. It was a significant turning point in my life. I moved from Berlin to England, lived there for 10 years in a Buddhist community and trained as a Yoga Teacher at the Iyengar institute in London and travelled several times to Pune to study and practise with BKS Iyengar.

I realized very soon that just the practice of yoga asanas (postures) was not enough for me. To have a deeper understanding of life and how the yoga practise works, I needed spiritual teachings to reflect on.

In my early travels to India I stayed at the Ramana Maharashi Ashram in the South of India which had a profound effect on me. I spend several times in Auroville, teaching yoga and studying the teachings of The Mother and Sri Aurobindo. My practice is inspired by the ancient Yoga Sutras, the teachings of Advaita Vedanta, Buddhism, modern psychology and quantum physics . My emphasis is and has always been the path of the heart, direct experience and a down to earth truthfulness.

I don’t follow one particular yoga school or teacher, because I know that the true ‘Guru’ is within our own hearts.

I call my style ‘Yoga Body of Light’, a journey into the more subtle body, the body of breath, energy flow, prana, transparency, lightness and joy, using the classical hatha yoga asanas to connect with that within us, which is beautiful and in harmony: the body of light. My teachings are always changing and directly from my heart experience, often very spontaneous and unpredictable.

In my later years I spent several times in the Himalayas, deepening my practice in yoga, pranayama and meditation. I visited several ashrams and monasteries, went on solitary retreats, silent retreats, meditated in caves, forests and on mountain tops, faced my fears on many levels and became may be not much wiser but more humble and compassionate.

For many years I studied with Swami Veda Bharati the ancient teachings of the Himalayan tradition and went on retreats at his Ashram in Rishikesh. I am a devoted follower of Mooji’s non dualistic Advaita teachings as well as Dilgo Khyentse Rimpoche, a master of Tibetan Buddhist teachings, especially the non dualistic direct teachings of Dzogchen.

I have been teaching now for more than 30 years, I’m 65 years old. I will never stop seeking since I realised that life is about inner growth, self inquiry and a gradual awakening to higher dimensions of life, to one’s own essential nature. Yoga is the most challenging, most revealing path we can choose, if we practice it in all it’s aspects. 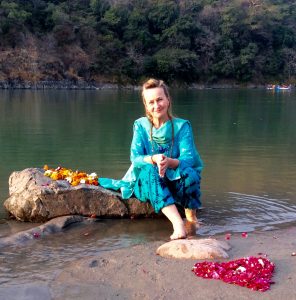 Yoga in Victoria Park, by the Pavilion Cafe 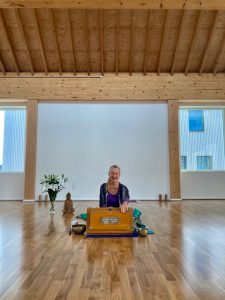 A one day  Relax and Restore Retreat to take some time to deeply rest.
In this very beautiful and spacious studio I offer simple accessible yoga postures, short meditation sessions, gong bath, chanting and deep relaxation which will give you time and space to connect with yourself on a deeper level and to find stillness.
For all abilities. Please bring you own mat and blanket.

Date to be confirmed 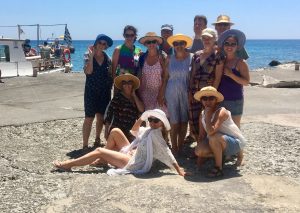 We are going again on this beautiful, small, remote Greek island Folegandros, 40min Ferry from Santorini.

The retreat is going to be deeply relaxing and nourishing  practising by the turquoise  mediterranean sea. A place to take plenty of deep breaths!

We start in the morning at sun rise with sun salutations and meditation. There will be another morning and afternoon yoga session and meditation in the evenings.

There will be time to go swimming or simply relax on the beach, draw, write or paint or read a book in a quiet shady place, going on boat trips or walks, or just resting  and eating fresh Mediterranean food.

I have a whole range of private students. I’m working with people with back problems, cancer, depression, panic attacks, chronic fatigue, Parkinson decease and with people in wheel chairs or with stress-related problems as well as with those who simply want to keep fit and healthy.

My teaching is completely intuitive. I integrate into my yoga teaching the knowledge of Ayurveda, Pilates, Holistic, Therapeutic and Thai massage, chanting, Tibetan singing bowls, Reiki healing as well as breathing techniques.

I do home visits or you can come to my home studio.